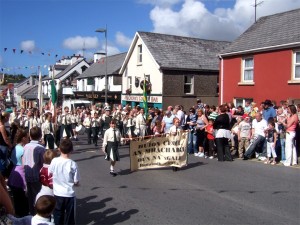 The Gweebara Bridge marks the beginning of that part of Donegal which many believe to be the REAL Donegal - The ROSSES. Here, nestling in an ideal holiday location among purple heathered mountains and surrounded by over 130 fresh water lakes, there still lives a quiet, soft-spoken people, who, as yet, have retained much of that old world courtesy, charm, and friendliness which is so rapidly disappearing in amore highly urbanised world.

The Rosses extends from Crolly Bridge in the north to Gweebarra Bridge in the south, embracing all the intervening coastline and islands, penetrating inland as far as the Derryveagh mountains and the alpinesque village of Doochary.

In 1654 the Conyngham family came into possession of the Rosses following the Cromwellian Plantations and as a reward for assisting Cromwell at Drogheda.

DUNGLOE - An Clochán Liath is the only town in an area reputed to be the most densely populated rural area in Europe. The origins of the town date back to 1762 when the Dungloe Bridge was built. Prior to that, persons entering the town did so by stepping the river's stones - hence the Irish name - An Clochán Liath - Grey Stones. Even at the end of the 18th century there were only five houses, all of wooden structure, in Dungloe proper. To-day Dungloe is a thriving commercial town - a unique tourist and friendly area where no effort is spared to satisfy the visitor.
It is also the home of the now internationally famous 'MARY FROM DUNGLOE' Festival.